A few years back I wrote a Rubik about an unusual occurrence in Sanctuary Lakes and that was the first-time sighting of all four species of endemic Australian Cormorants around our Lake. Beside the Cormorants the article also included the Australian Darter, a species that is often considered one of the Cormorant family. At the end of the piece I wrote “Let’s hope the neighbourhood is to their liking and they move in”

Well four years later they all seem to have settled happily into the neighbourhood, in particular the Australian Darter 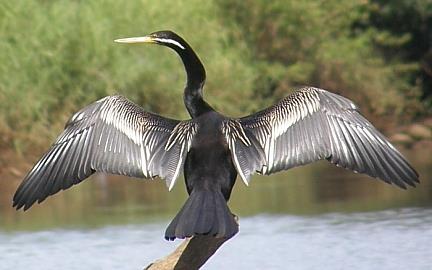 For me, the Australian Darter is my favourite feathered friend. I think of the Darter or his nickname the Snakebird, as the philosophers of the bird world. I know a lot of people would point to owls, but I am of the opinion that there is something of the wise old Mediterranean fisherman about the Darter. They go out at first light and get their fishing over and done with, then head to shore, hang their wings out to dry in the morning sun and contemplate the world. For me, that is philosophy at its finest. Thinking on a full stomach. Even when they shuffle around on their large creamy grey web feet, they have the behavioural persona of a doddery Oxbridge Professor physically attempting to analyse a key Wittgenstein principle.

Although very similar to the Cormorant family the Australian Darter is one of the Anhinga family. The easiest way to see the difference is their bills. Unlike cormorants, that have hooked bills to grab fish, the Darter has a long daggerlike bill with which they spear fish.

The feathers of Darters, are much less water resistant than those of other waterbirds. Many people believe that this is because the birds lack oil glands and therefore cannot smear their feathers with a waterproof coating. However, it is the physical structure of the feathers, not a coating of oil, that makes the Darter’s feathers less waterproof.

So, Darters, and to a lesser extent cormorant, have feathers whose structure is less waterproof, and this adaptation allows them to pursue their prey underwater with greater ease. It comes at a cost, however; they must dry their feathers after wetting them, and in the case of Darters, spend plenty of time in the sun not only to dry their feathers but to keep their body temperatures high. 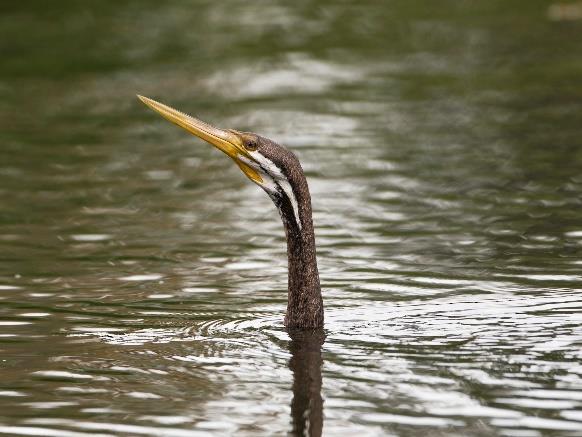 As can be seen daily on our Lake, the Australasian Darter forages in the water, often with only its head and neck exposed, giving rise to the nickname Snakebird. It enjoys our Lakes plentiful supply of fish, Black Bream, Flatheads and Hardy Heads. They also enjoy the shrimp, worms and cephalopods living amongst the sea grass. Tiny prey, such as shrimp, are swallowed during swimming but a larger prey item is speared underwater with the beak, then the Darter returns to the surface to juggle the prey until it is swallowed head first. Large fish may require up to 20 turns to get the head-first position required for the Darter to swallow the whole fish.

The Darter is a medium-size water bird (85 to 90 cm long, with a wing span to 1.2 metres) Males and females have distinctly different colouring. Males are almost entirely gloss black. The head is marked with a white stripe below the eye extending along the side of the neck from the base of the bill, passing under the eye and ending level with the throat. The bill is brown above and yellow below; Feet are cream to grey-brown. The long-rounded tail is grey buff

Females are dramatically different. Their entire underside, throat and breast down to their legs are creamy-white. The stripe on their side of the head is reversed and has dark edges. The Female is similar to the male with a yellow/brown bill and black wings with pale grey fringes.

Observing the Darters around Sanctuary Lakes one can see that they tend to be a solitary bird, unlike the Cormorants who enjoy forming flocks, they seem to prefer feeding and wing drying alone. But they do form pairs while breeding. Darter’s breeding time is erratic, happening whenever water levels and food supplies are suitable. Last year our spring time was relatively dry, but with the early November rains Darter pairs could be viewed nest building. In Sanctuary Lakes the nests were usually solitary. Normally seen in trees that fringe the Lake, usually built in the fork of an overhanging branch about 3 to 5 m above the water's surface. Both sexes complete the nest, three to five elongated oval eggs are laid and together the parents incubate the eggs and raise the young. Chicks are kept warm by brooding continuously (or cooled down by shading with spread wings) for up to a week after hatching and both adults stay in the nest with the chicks overnight. In hot weather, the adults will even shake water over the chicks after a swim. Chicks can swim after about four weeks in the nest and start to fly at about 50 days. 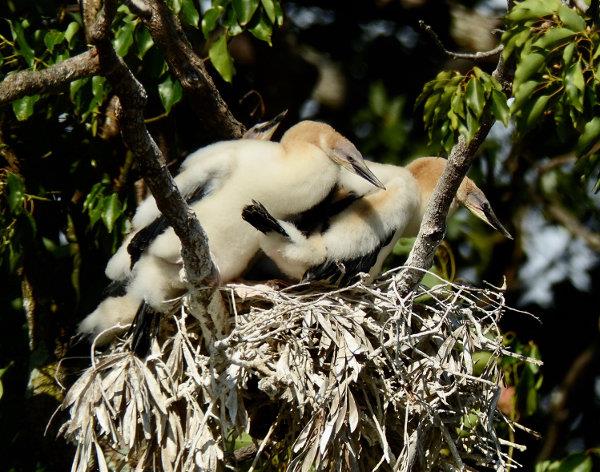 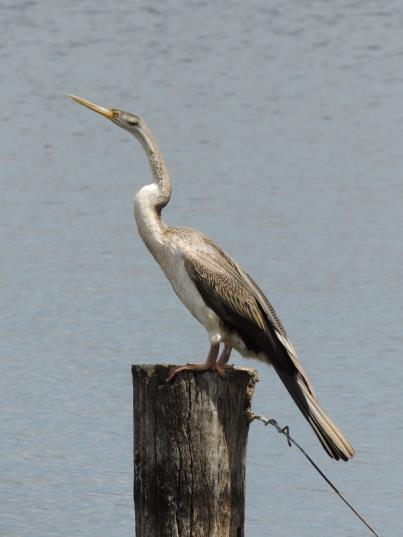 The Darter Chicks are hatched with almost pure white plumage, slowly as they mature light brown patches appear around their necks and pale grey wing feathers start to form. After almost a year the young finally receive their adult plumage. Within another two years they will start on their breeding cycle. Australian Darters will live between 15 and 20 years of age.

Finally, one fascinating trivia fact is that the Australian Darter is the oldest known Australian Bird to have survived intact the galactic climate changes of ancient yesteryear. Remarkably fossils of the Darter have been recovered in Australia from several Pleistocene Era strata.