As we set off from the Northern Boulevard Pier, we started to view our recent neighbours, the 30 plus flock of Pelicans, that appear, for the moment, to have made Sanctuary Lakes home. 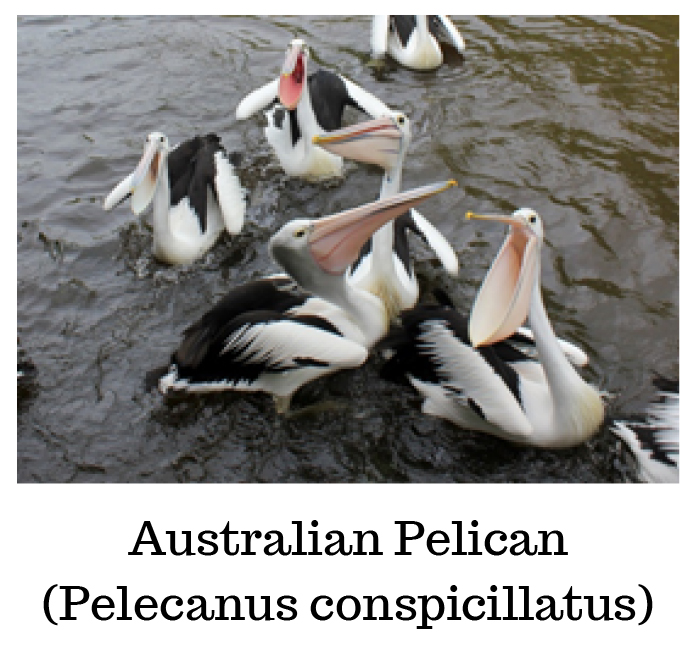 The Australian Pelican may feed alone, but they seem to enjoy feeding as a cooperative group, working together, driving the prey into a concentrated mass by using their bills and beating their wings. Surrounding them in ever decreasing circles, and herding them into shallow waters.

Pelicans plunge their bills into the water, using their pouches as nets. Once something is caught, a pelican draws its pouch to its breast. This empties the water and allows the bird to manoeuvre the prey into a swallowing position.

Anthony tells me that the Pelicans are attracted to our neighbourhood by the large amounts of shrimps, juvenile ells and small crabs that live in the Sanctuary Lake seagrass and algae.

As you watch the Pelican’s bills gobbling their fresh sea food marinara, remember the Australian Pelican has been recorded as having the longest bill of any living bird in the world. That’s one for the trivia notebook.

Quite suddenly just ten metres from the Pelican circle a yellowy olive 20cms fish jumps out of the water. Anthony tells me it is one of the Lakes latest additions, the fast-growing Yelloweye Mullet population. 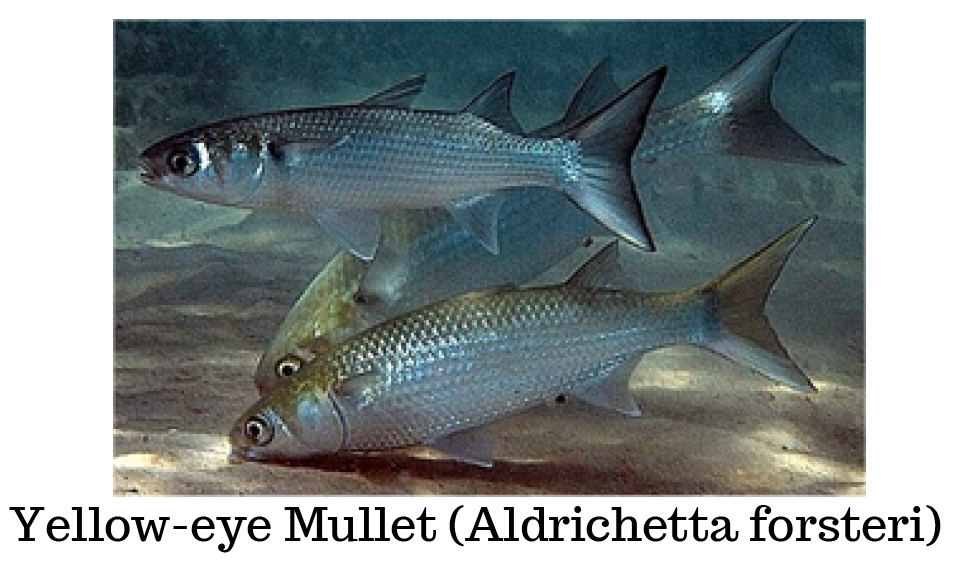 Yellow-eyes are a reasonably fast growing, short-lived fish, reaching sexual maturity after only three to four years with an average life span of seven. Can grow up to 80cm, but most are around half that size.

They enjoy living in salt water lakes, feeding off the algae and fish detritus. They normally spawn during early autumn out in the open sea. Unfortunately, as Anthony tells me, Sanctuary Lake’s Yellow-eye Mullets are unable to get over the weir to the open sea. At Easter this year, schools of hundreds of Yellow-eyes were seen swarming around the weir and southern jetty trying to get out to sea. Most turned back into the lake and judging by the increase in population have possibly, started spawning here.

Also, Anthony told me about another fishy arrival that he had recently seen around the Lake’s seagrasses adjacent to Island 33, and that was pairs of local Port Phillip Bay’s Puffer Fish, the Smooth Toadfish. 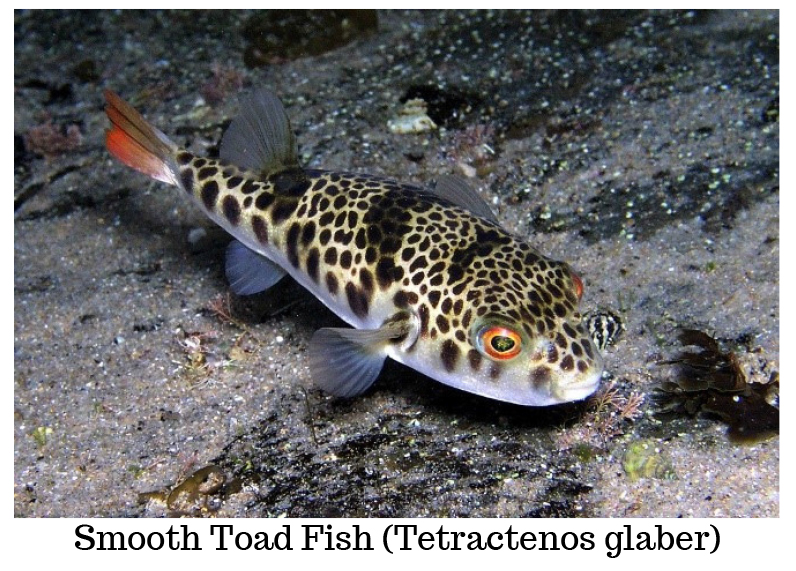 Smooth Toadfish adults grow to 16 cm long with distinctive leopard-like dark markings on their dorsal side with a rounded front that tapers to a narrow tail at the back. Unlike most Puffer Fish, it does not have prominent spines on its body, but like other Puffer Fish, it can inflate itself with water or air. It forages for its preferred foods—molluscs and crustaceans—in the sand and mud of the bottom sediment.

But BEWARE, the Smooth Toadfish like all Puffer Fish is highly poisonous. An unwanted catch by anglers is extremely dangerous even to touch and eating it, can result in death.

As we moved between the Islands, discussion between Anthony and I turned to the health of the Lake. From the bow of the Truxor we could see physically the huge number of activities the Lake’s Birds and Fishes were enjoying. In its own way it told us more about the good health of the lake than any report card can possibly describe. The fifty plus Swans, the hundreds of Coots and Ducks all living off the Lakes bountiful seagrasses and vegetation together with the fish, shrimp, crabs, worm and eel eaters such as the Pelicans, the hundred of Cormorants, Egrets, and Spoonbill all now living healthily off the lake. 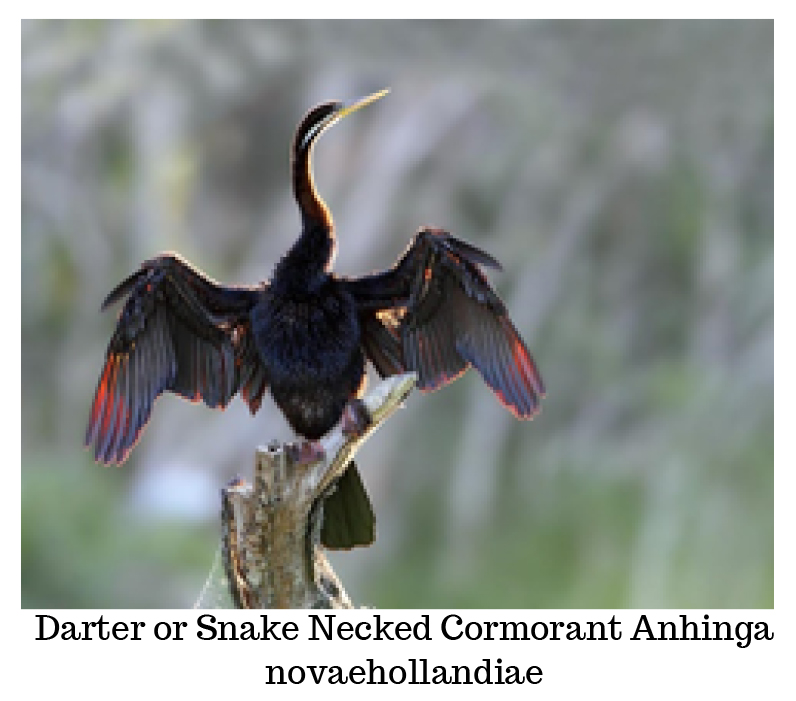 The huge flocks of Cormorants are remarkable. All four species, the Great, the Pied, the Small and the Darter seem to have taken up residence in the neighbourhood.

My favourite Cormorant, the Darter or Snake Neck, are already starting to nest in the River Red Gums by the lake. Last spring, I observed a pair of Darters unceremoniously, evicting Ravens out of a lakeside Gum tree to build their own nests.

My favourite Cormorant, the Darter or Snake Neck, are already starting to nest in the River Red Gums by the lake. Last spring, I observed a pair of Darters unceremoniously, evicting Ravens out of a lakeside Gum tree to build their own nests.

There is something about old Snake Neck that reminds me of Mediterranean fisherfolk. They both go out at dawn and get their fishing done, then head to shore, the fishermen to gossip, mend their nets, and bask in the sun. Likewise Snake Necks alight to a branch above the lake, turn to the bright morning sun, hang their wings out to dry and contemplate the world.

Probably the most common and plentiful shorebird on the lake are the Eurasian Coots. Anthony and I discussed one of those rarely seen, yet regular rituals of this timid little water bird. The ritual starts at sunset as all the hundred plus Coots on the lake slowly congregate. By nightfall they paddle in groups to a dark and isolated part of the lake and form circles. This ritual is rarely seen and because it happens at night and because there is so little light, it is even more rarely photographed. But long time Sanctuary Lakes neighbour Rob Merola has achieved the impossible and in a series of shots against almost no light, illustrates the ritual.

As the Truxor swung towards the Jetty, I asked Anthony what did he enjoy most about working on the Lake.

“The interaction between the Lake Maintenance Team and the Lake’s Bird life.” Which is probably best personified by the great photo below of the Egrets diving on to the freshly cut sea grass in the barge’s scoop to snaffle the hidden food treasures. 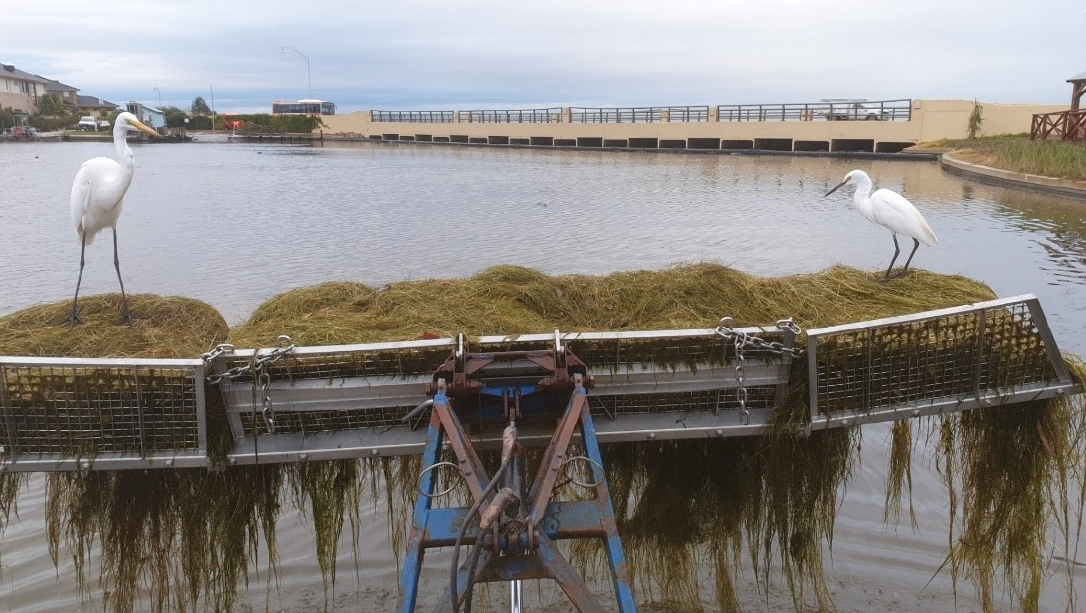