One of the pleasantries of living in Sanctuary Lakes is that thanks to our geological position on the edge of the Great Western Plain and adjacent to Port Phillip Bay we have what the old landscape painters called the Big Sky. On clear days and nights, we can see planes circling towards Tullamarine from as far away as Mount Macedon. Likewise, we often see flocks of birds, Pelicans, Ibis, Swans, Terns circling our neighbourhood. Around dusk I used to occasionally see small groups of Grey Headed Flying Foxes, but over the past couple of years, Flying Foxes visiting our neighbourhood, has become an almost regular occurrence. 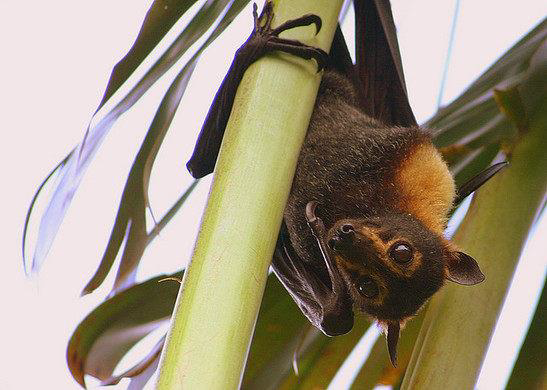 Sanctuary Lakes lies between two major Victorian Grey Headed Flying Fox camps. One on Yarra Bend in Melbourne which in the summer has over 35,000 daily inhabitants and another in Eastern Park Geelong which has up to 15,000 daily summer stayers. Flying Foxes are nomadic and although they do set up camps, they should be seen more as hotels, with at least 10% ‘packing their bags’ and leaving in the evening with an equal number ‘booking in’ the next morning. Those migrating between Yarra Bend and Geelong’s Eastern Park are often the Sanctuary Lakes visitors. The Flying Fox will consume nectar and pollens of around 180 plant species, but their favourite foods are Eucalypts, particularly Bloodwood (Corymbia gummifera), Yellow Stringybark (Eucalyptus muelleriana), White Stringybark (Eucalyptus. globoidea) and fruits from members of the Ficus genus. All of which grow in our neighbourhood providing a year-round smorgasbord of food. Walking by these trees of an evening, you can sometimes hear a small group of Flying Foxes squeaking in delight as they take in the juicy nectar and pollen.

The Grey Headed Flying Fox and sometimes called a Fruit Bat, is the largest bat in Australia. The overall colour is a dark-grey body with a light-grey head and a reddish-brown collar that fully encircles the head. The fur on the body is long and streaked with grey. A unique characteristic is that the fur on the legs extends all the way to the ankle. Adults may have a wingspan reaching one metre in length and up to one kilogram in weight.
Like the majority of Bats, the species lacks a tail, but like all Bats, they possess claws on their first and second digits. The head is simple in form, with the defining
characteristic, 'fox-like' appearance. It relies on smell and predominately sight, to locate its food. They don't use sonar like smaller, insect-eating bats, they like us, just use their ears, eyes and nose. Flying Foxes have good sight, similar to that of a domestic cat at night and thus has relatively large eyes.
Flying Fox’s voice can sound similar to a complex series of squeals and screeching’s. But being a very social animal, they have sophisticated vocal communication between themselves, making more than 30 recognisable and specific calls.
They will flap their wings in hot weather, using the blood pumped through their wings to cool the body temperature. Also Flying Foxes need to drink a lot of water on hot days, so they like to locate themselves close to water. Their unusual method of drinking is by dipping their belly in the water while flying and then lick the water from their fur.
For its size the Grey Headed Flying Fox is a long-lived mammal. Individuals, in the wild, have reportedly survived to a maximum age of up to 15 years. 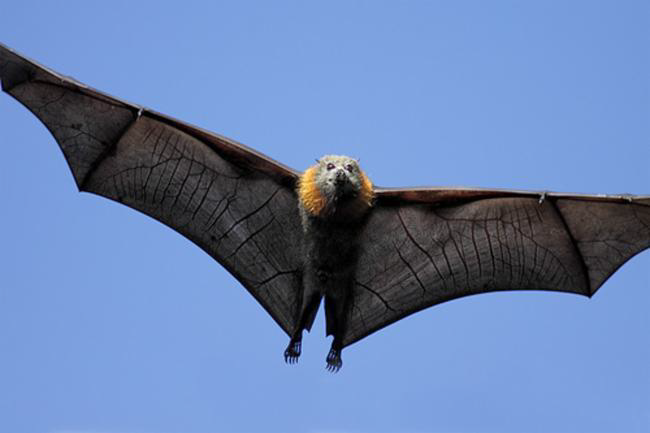 Movements of Grey Headed Flying Foxes are influenced by the availability of food. Their population is very fluid, as they move in response to the irregular blossoming of certain plant species. The Flying Fox is a very important animal in our ecology, they are an essential keystone pollinators and seed dispersing over 100 species of native trees and plants. The grey-headed flying fox is a partial migrant that uses winds to facilitate long-distance movement. It does not migrate in a specific direction, but rather in the direction that will be the most beneficial at the time.

Although recorded in small numbers sporadically throughout twentieth century it was not until the 1980s that Grey-headed flying foxes routinely visited Melbourne with a permanent camp since the 1990s. The spread South is likely due to climate change, habitat loss and drought. while the location of the new camps appears to be in response to urbanisation: a reliable food supply (such as native eucalypt plantings and backyard fruit trees), and warmer temperatures due to climate change and urban heat islands

Mating is generally observed between March and May, but the most likely time of conception is April. Females usually give birth to one young each year. Gestation lasts around 27 weeks, and pregnant females give birth between late September and November. Newborns rely on their mothers for warmth. In their first three weeks, the young cling to their mothers when they go foraging. After this, the young remain in the roosts. By January, young are capable of sustained flight, and by February, are fully weaned.

Due to some classic literature and popular movies (Dracula) Bats have a reputation of carrying diseases, particularly rabies. Fortunately, the rabies virus has not been found in any Australian Bat species, but they might, and this is very rare, carry the Lyssa or Hendra virus. Therefore, if you see an injured Flying Fox do not handle it. Contact a wildlife rescuer from the Melbourne/Werribee Zoo.

Grey Headed Flying Foxes are intelligent and remarkable. These unique animals help regenerate our forests and keep ecosystems healthy through pollination and seed dispersal. They are a migratory and nomadic 'keystone' species; meaning a species that many other species of plants and animals rely upon for their survival and wellbeing. Flying foxes, like bees, help drive biodiversity, and faced with the threat of climate change, land clearing, and other human-caused ecological pressures, we need them now, more than ever.