Natures Rubik: The White and the Blue

For the past twelve months Sanctuary Lakes has had the strangest of weather patterns. Sure, we have had the four seasons and sometimes all in one day. Since late March and early April, the weather has bounced from hot sunny burst to wild, windy and wet. Leaving some of us totally confused. But it has created something unusual, a third or maybe even a fourth, seasonal wave of Butterflies.

There is nothing quite so pleasant on a warm windless day to wander around the Resort’s Parks and Gardens and the fringes of the Gold Course observing numerous groupings of bustling Butterflies fliting around various plants and bushes. Sanctuary Lakes most common and also simply named, are the White (Cabbage) Butterfly and the Blue (Common Grass) Butterfly. 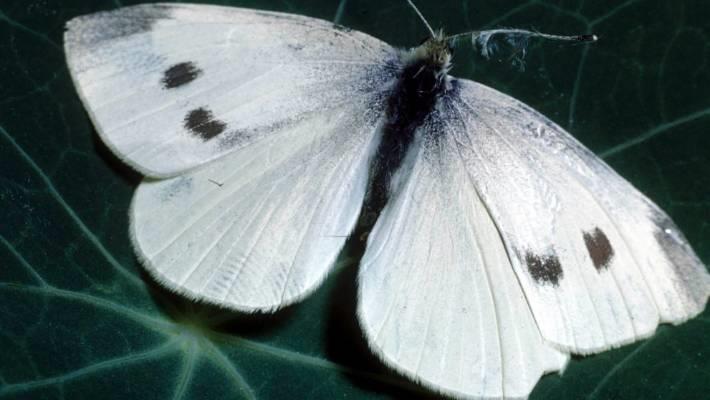 The Cabbage White is probably the best known and seen butterfly in Sanctuary Lakes. As the name implies it is a striking medium sized white butterfly, with two lovely grey/black spots on its 3 to 4.5cm creamy white wings. The Cabbage White Butterfly is an introduced species from Europe and was first recorded in Melbourne in 1929. Sadly, thanks to its velvety green caterpillar’s love of eating the cultivated Brassica Family plant vegetables (Cabbage, Brussels, Kale, Bok Choy, Celery, Beetroot etc) it has become a major pest throughout Australia. The Cabbage White caterpillars can quickly munch their way through large vegetable leaves, leaving massive irregular holes throughout the plant. Ruining swaths of vegetable fields, patches and gardens.

In our neck of the woods, the Werribee South market gardeners are vigilantly controlling the pests. Here in Sanctuary Lakes we have a twist to the tale. The Cabbage White caterpillar has taken to eating other plants of the Brassica Family which are considered by many agriculturists as “weeds”, namely the Hedge, Field, Short Pod Mustard plants and the Musk weed. Often mistaken for members of the Dandelion family these plants with their small white and yellow petal flowers and large serrated leaves can grow furiously around the Estate. And here’s the Twist, the White Butterfly Caterpillar’s munching skills are assisting us in controlling our weeds

The Cabbage White’s life cycle is largely dependent on environmental temperatures; hence our warm early Autumn gave the White’s cycle an extra turn. Egg-laying ceases in winter and increases in spring, and eggs are most commonly found in crops during the warmer months. Normally in spring and summer the female White will readily lay her eggs singularly beneath the leaves of both cultivated and wild members of the cabbage family. The small eggs are characterized by a bottle shaped yellowish colour. In warm conditions the eggs hatch into caterpillars after about four to five days.

The Cabbage White Caterpillar exiting from its eggs

The Caterpillar is voracious. Once it hatches from the egg, it eats its own eggshell and then moves to eat the leaves of the host plant. It bores into the interior of the plant, feeding on the new sprouts. The mustard oil digested from the host plants makes the Caterpillar distasteful to birds. When resting, a caterpillar aligns itself with the leaves of the host plant so that the yellow lines on its body look like the veins of the leaf, but if strongly handled or attacked, it ejects the mustard fluid which acts as a repellent. Again, depending on the weather, seventeen to twenty days later the caterpillar transforms into a Pupae.

The Pupae is brown to mottled-greyish yellow, blending into the background of the leaf colour. It has a large head cone, with a vertical abdomen and flared subdorsal ridge. It can remain as a Pupae for as little as ten days or if Winter has approached up to two months before the White Butterfly can finally release itself.

The Cabbage White’s are strong flyer. Adults fly throughout the day, except for very early morning and late evening. There is occasional activity during the latter part of the night, but it ceases as dawn breaks. The Whites can move many kilometres in individual flights. Adults have been observed flying up to 12 km in one flight. On average, females fly about 0.7 km per day and moves 0.45 km from where she starts. Males patrol all day around host plants to mate with females.

The Adults feed off the nectar from the flowers of the Brassica Family. The female White selects the plants for egg laying. She limits her search to open sunny areas, avoiding cool, shaded woodlands. Governed by the weather, females are seen laying eggs as early as October and as late as April 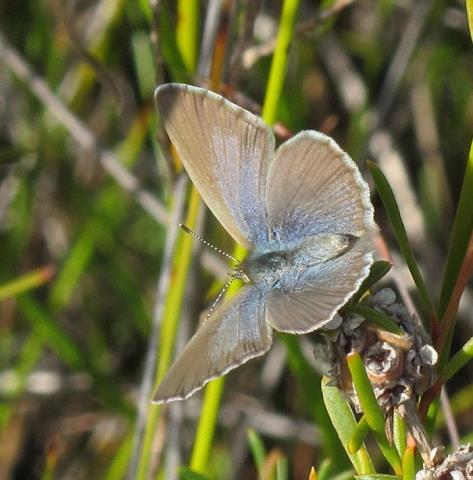 Although the Common Grass Blue Butterfly is as plentiful on the Estate as the White Butterfly, it is not as easy to observe. The reasons are twofold. Firstly, this Native Butterfly is tiny, no more than a 3cm wingspan and with a delicate blue and lilac colouring that camouflages it against the low-growing plants and grasses it lives within. Secondly it flies extremely close to the ground in a zig-zagging manner, flitting quickly between its food plants. Often the easiest way to observe them is to walk heavily into an open grassy and weedy patch. Look down carefully and watch as a small cloud of tiny Blues, startled by your approach, take a low fluttering flight between their food sources.

The Common Grass Blue feed from the nectar of low growing flowering plants. It is here that they build a strange relationship with Black Ants by “spilling” nectar for the Ants to eat. In turn the small Black Ants will tend the developing caterpillars and pupae.

The eggs are laid on leaves, stems, flower buds and young pods of food plants such as Clover, Emu Foot, Lucerne and various other native species. Eggs are white or pale blue and have a mandarin shape with a pitted surface. Single eggs are laid which can hatch in a matter of days. Caterpillars can reach about 7 mm in length, and their appearance is primarily green with a yellow stripe at the sides and a darker green stripe on the back. Newly hatched Caterpillars eat small holes from young leaves or flower buds, and later feed mainly inside flowers. Within fourteen to seventeen days they will transform to Pupae

The Pupae attaches to the lower leaf surface of the food plants with tail hooks and a central girdle. The ants guard the Pupae keeping predators away. Again, dependent on the weather and the season, the adult Blue Butterfly can free itself from the Pupae within a week or as long as the first early warm days of Spring.

Even in this mid-autumn there are still many species of Butterfly flitting around Sanctuary Lakes. This week I spotted an Australian Painted Lady Butterfly hovering around their favourite food plant the Lavender. And over in Breezewater, our one and only Altona Skipper Butterfly. When you next take your wander around the Estate keep an eye open, you could be surprised with what you see.