This spring time saw an unusual occurrence which hopefully becomes a regular feature of Sanctuary Lakes. That feature was the sighting of all five varieties of Australian Cormorants around the main lake. Whether they are visitors or new permanent neighbours, there is one fact of which we can be certain: they are here for the plentiful sea-food from our lake and wetlands, rather than the spring carnival.

Although there over 40 species of Cormorant Worldwide, there are only five endemic to Australasia.  They are the Great, the Pied, the Little Pied, the Black and the Darter Cormorant.

Cormorants are one of the few species that are capable of flying (strongly and for long distances), swimming (lengthy underwater dives) and walking (comically). They are coastal rather than oceanic birds and have colonised in Australia's estuaries and inland waters.

Cormorants live on fish, crustaceans, molluscs and even sand worms. They dive from the surface, making a characteristic half-jump as they dive, presumably to give themselves a more streamlined entry into the water. Under water they propel themselves with their large webbed feet. Some cormorants can dive to depths of 30 metres. They have excellent water vision due to special nictitating membranes that cover and protect the eyes underwater.

Cormorants often fish as a flock.  They can be seen on Sanctuary Lakes marshalling themselves as the sun rises at the entrance end of the lake and working their way along in lines chasing the shoals of fish down the lake.

After fishing, cormorants go ashore and are frequently seen in their classic pose of holding their wings out in the sun. All cormorants have preen gland secretions that are used ostensibly to keep the feathers waterproof. Many theories have been suggested why Cormorants commonly take the spread-wing posture, including that it aids thermoregulation, digestion, balances the bird or indicates presence of fish. But a detailed study of the great cormorant concludes that it is without doubt to dry the plumage.

The largest of the Australian Cormorants is the Great Cormorant. This impressive bird stands about a metre high with a wingspan of one and half metres.  It is Jet Black, with small bronze flecks on its wings and a firm golden bill and cheeks. Best place to view on Sanctuary Lakes is the Bar off the 16th green, where the Lake's resident flock of some 20 plus Great Cormorants dry their wings in the sun after a fine feed of fresh Bream.

The Great Cormorant tends to fish in groups of three or four and have the habit of bringing the catch to surface and then swallowing it whole. At the Western End of the lake, I once watched a "Great" catch and swallow whole a 20cm Bream.

The next largest Australasian Cormorant is the Pied Cormorant.

The Pied Cormorant is a large (70cms high) black and white bird with a long, grey, hooked bill and black legs and feet. It has a very distinctive orange eye-patch and bare throat skin, with a blue eye-ring surrounding a green eye. Its black back is glossed green, and its underparts are all white, except for black stripes on the thighs. 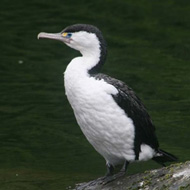 Pieds are relatively people friendly and can be seen drying themselves on the Lakes beaches. Flocks are often seen flying above Sanctuary Lakes and Cheetham Wetlands in V-shaped formations or long lines.

The Little Black Cormorant is a small (60cms high), slim, and as the name implies a totally black cormorant with a greenish sheen to the back and a slender grey hooked bill. In the breeding season, adults have fine white flecks on the head and neck and the green tinge becomes more bronze. The Little Blacks congregates in larger flocks than other cormorants and flocks are often seen chasing the fish shoals up and down the lake. In the later afternoon they can be seen flying in distinctive V-shaped formations to spend the night on shore fringes of the Cheetham Wetlands. 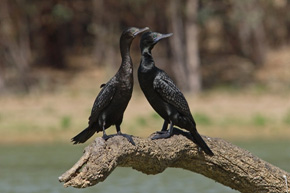 The smallest of the Australian Cormorants are the Little Pied standing at around 50cms and is one the most common waterbirds of South East Australia. The Little Pied is also the most numerous of the Cormorants species on Sanctuary Lakes. It is often seen happily perched with wings spread on the wharfs, sea walls and beaches.   It is easily recognisable being entirely black above and white below. The face is dusky and, in adult birds, the white of the underside extends to above the eye.

Although very common, the Little Pied is in the main a solitary bird rarely seen in flocks and will fish, feed and fly on its own.

The Darter Cormorant are large birds and can grow to a metre in size with a wing span of one and half metres. The males have black and dark brown plumage, a short erectile crest on the nape and a larger bill than the female. The females have a much paler plumage, especially on the neck and underparts, and are a bit larger overall. Both have grey stippling on long scapulars and upper wing coverts. The sharply pointed bill has serrated edges and no external nostrils. The darters have completely webbed feet, and their legs are short and set far back on the body. During breeding, the female's neck underpart changes from light pink or yellow to black, and the bare facial skin, otherwise yellow or yellow-green, turns turquoise. 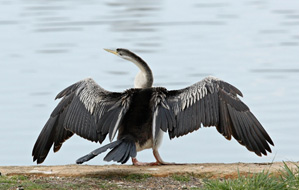 The Darters are built to fish. Foot-propelled divers, they quietly stalk and ambush their prey; then they use their sharply pointed bill to impale the food animal. They do not dive deep but make use of their low body weight. After they have stabbed the prey, they return to the surface where they toss their food into the air and catch it again, so that they can swallow it head-first. After fishing, like all Cormorants they move to a safe location and spread their wings and dry their feathers after diving.

Darters are nicknamed 'snakebirds' due to the fact that when the Darter birds swim submerged often all that can be seen is their conspicuously long neck (see photo below here). 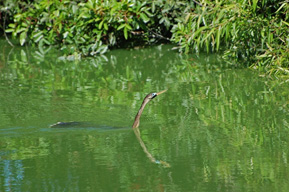 I made this mistake with the first Darter I saw in Sanctuary Lakes. Darters normally enjoy fresh water and temperate climate therefore on first glance I thought it was possibly a snake, but as soon as I watched it dive, saw its large webbed feet, I realised it was the Darter Cormorant. Although the Darter is not a known to be nomadic, I have had sightings in the Canal/lake area for the last two summers, and with this year's sighting coming early in spring. Let's hope the neighbourhood is to their liking and they move in.

We are extremely lucky to have all five Cormorants as neighbours even if one is probably a regular visitor. The only reason birds live here is that there is a good plentiful food supply and reasonable security. Thanks to the Lake management team, the healthy lake is presently abundant with good bird tucker and that the other neighbours peacefully enjoy the beauty, grace and comedy of our wonderful Aussie Cormorants.