A Sanctuary Lakes' first: One of our smallest neighbours is a little 'Aussie' champion.  Birdlife Australia magazine announced a national poll to identify the country’s most loved feathered animal and named the winner, the Superb Fairywren.  The Fairywren's triumph was not just its good looks, but a sociable, cute, cheeky character and a very individual approach to going about their business. 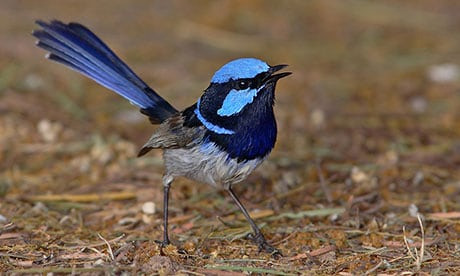 Male Superb Fairywren Malurus Cyaneus It is always a great sight to see the adult male Superb Fairywren.  The most brightly coloured of the species, particularly during the breeding season.  Rich blue and black plumage above and on the throat.  The belly is grey-white and the bill is black.  At the end of the breeding season the male will slowly start to lose most of its blue colouring, turning brown with a light grey belly. Females and all juvenile birds are mostly brown with the female having distinguishing bright red-orange area around the eye and a brown bill. Females have a pale greenish gloss, absent in the juveniles, on an otherwise brown tail. The legs are brown in both sexes.  They are tiny birds about 14cm in size and that includes the 6cm tail. They weigh in at a miniscule 12g. 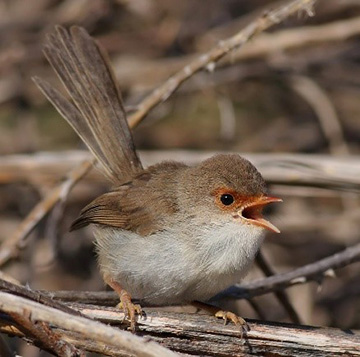 Female Superb Fairywren Superb Fairywrens are immediately recognisable from other small birds by their movements which are a series of jaunty hops and bounces, with its balance assisted by a proportionally large tail, usually held upright, and rarely still.  The short, rounded wings provide good initial lift and are useful for short flights, though not for extended jaunts, limiting them to their chosen group and breeding areas.

The male Superb with his flashy incandescent blue colouring, has been dubbed the "least faithful birds in the world" owing to their rampant promiscuity. Female birds have been observed being courted by 13 males in a half-hour period.  Is that another first for Sanctuary Lakes?

This month, in our Gardens and on the fringes of the Golf Course, the Superb Fairywrens are forming groups of up to eight, around a dominant male.  The rest of the group is made up of brown 'superb jenny wrens', often assumed to be a harem of females, but a proportion of them are males that have not yet attained their breeding plumage. Already there are four or five groups around the public footpath between the maintenance shed and Times Square.  Also, another a couple of groupings can easily be seen either side of the public walkway tunnel under the Northern Boulevard from the 1st and the 5th Green.

The Superb Fairywren is an active and restless feeder, particularly on open ground near their dense nesting bushes and also in the lower foliage of the Salt Bushes.  During spring and summer, birds are active in bursts throughout the day and accompany their foraging with very distinctive chirping song.

Superb Fairywrens are predominantly insectivorous.  They eat a wide range of small creatures (mostly insects such as ants, grasshoppers, shield bugs, flies, weevils and various larvae) as well as small quantities of seeds, flowers, and fruit.  Their foraging, termed 'hop-searching', occurs on the ground or in shrubs that are less than two metres high.  Because this foraging practice renders them vulnerable to predators, birds tend to stick fairly close to cover and forage in groups.  When food may be scarce, ants are an important 'last resort' food, constituting a much higher proportion of the diet.  Nestlings, in contrast to adult birds, are fed a diet of larger items such as caterpillars and grasshoppers.

Male and Female Superb Fairywrens in full breeding display Major nest predators include Magpies, Crows and Ravens as well as the usual suspected mammals such as the red fox, black rat, domestic and wild cat.  Superb fairywrens may utilise a so called 'rodent-run' display to distract predators from nests with young birds.  The head, neck and tail are lowered, wings held out and feathers fluffed as the bird runs rapidly and voices a continuous alarm call.  It has also been noticed that the bird recognises calls from predators.  This suggests this tiny bird species has adapted and learned to discriminate and respond to another species' vocalisations.  Could be another first for Sanctuary Lakes' little neighbour?

Superb Fairywren’s breeding starts shortly at the end of September and can continue through to late summer; the nest is a round or domed structure made of loosely woven grasses and spider webs, with an entrance in one side generally close to the ground.  For protection from predators the nest is built in dense bushes within thick vegetation. Two or more broods may be laid in an extended breeding season.  A clutch of three or four matte white eggs with reddish-brown splotches and spots. The eggs are incubated for 14 days, after which they hatch within 24 hours. Newborn chicks are blind, red and featherless, though quickly darken as feathers grow.  Their eyes open by day five or six and are fully feathered by day 10.  All group members feed and remove faecal sacs for 10–14 days. Fledglings are able to feed themselves by day 40 but remain in the family group as helpers for a year or more before moving to another group or assuming a dominant position in the original group. In this role, they feed and care for subsequent broods.

Although female fairy-wrens have a stable, social partner, when egg-laying time comes, they briefly leave their territory under the cover of darkness and "visit" the male who became blue earliest in the season.  Many of the females in the surrounding area prefer the same male, who may father around 70% of the offspring in the neighbourhood.

At Serendip Bird Sanctuary near Geelong, they have established a study of the Superb Fairywren and have come to the conclusion that through their social structures, co-operative breeding manoeuvres and vocalisation, they have a distinct and individual personalities.

The Superb is not nervous of humans and I do recommend a few minutes watching one of the many groups we have in our neighbourhood.  They are indeed beautiful to look at, cheerful, cute, chirpy and packed with a fascinating personality plus.