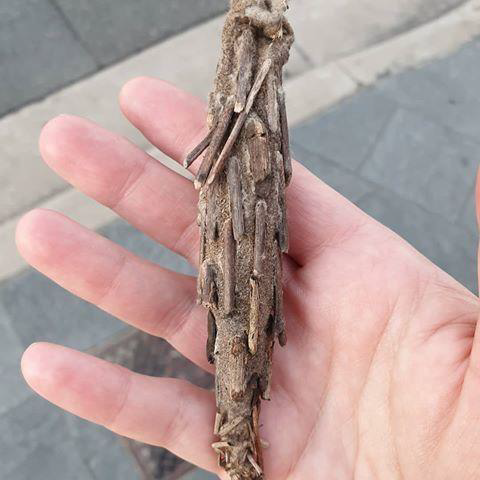 I initially saw this strange creature in the early days of summer when I first arrived at Sanctuary Lakes a decade ago. At first appearance it appeared to be a discarded shelter or sack, a strange long thin build of silk, leaves and small twigs. I marked where it was hanging above the footpath so I could return, for a closer inspection. An hour later I returned to my garden and it had disappeared. My first reaction was the wind had blown it, but then to my astonishment a metre away the sack cocoon was moving. A worm like caterpillar was clawing its way along the footpath attached or pulling its sack shelter. But the true surprise is that you would never suspect that this tattered twiggy casing contained a large, brightly coloured, living larva. 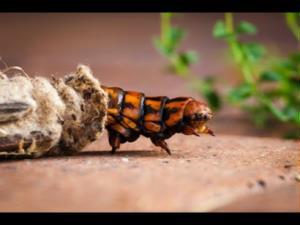 The caterpillar is indeed large, around ten centimetres long, a shiny black with orange stripes and a matching, rounded nub of a head. Its underbelly was covered in a series of sharp, opposing nails that dragged itself and the sack across the path and grass. I expected it would sense my presence and move quickly away. But instead, as if perceiving some appreciative audience, it swivelled its orange head around and sized me up with its eyeless face.

With a little research I found that this cocoon sack building exhibitionist, was in fact the Saunders Case Moth (Metura elongatus) the largest member of the 350 plus Australian Psychidaes or Bagworm families. Saunders Case Moths are common in Melbourne and in particular along Port Phillip’s western coastal areas. Since that first encounter I have regularly seen Bagworm Sacks in Sanctuary Lakes gardens and
around the fringes of the golf course. Some hanging off trees, or on foot paths and yet others brilliantly camouflaged as dying leaves or lying beneath bushes, amongst the fallen leaves. Besides its natural camouflage, the strong woven silk cocoon’s sacks are a fortress that can defy the bills and beaks of most insectivorous birds and seldom can a bird gain a tasty morsel by battering and hammering the tough malleable cocoon sack.

The Case Moth caterpillar builds its cocoon sack from the head end. So, as it grows bigger, it has to attach more, and larger twigs. These cases are very strong. The twigs themselves are incorporated into the silk by the caterpillar cutting a slit on the inside, temporarily attaching a twig to the outside beforehand. Then they go inside and pull the twig into position from the inside, then sealing the slit again. The process of cutting the slit alone can take an hour. Once the initial cocoon is built, the construction is far from over. As they pupate head down, case moth’s will continue adding to their cocoons: cutting each stick and attaching it with homespun silken yarn. If threatened, they simply seal the entrance and wait until the threat passes before cutting their way out of the sealed entrance. The caterpillar will live in this sheltered sack case for up to two years. 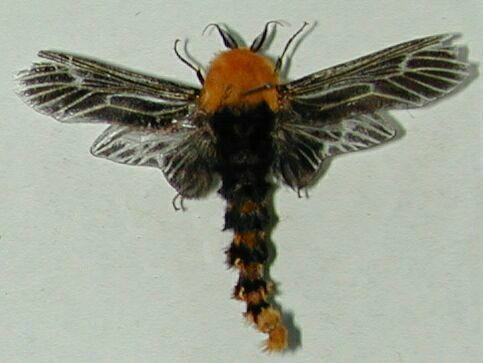 At the end of the two years, if it’s possible to imagine, is where things get much weirder in the Saunders Case Moth’s family life cycle. The fully-grown larvae of both sexes pupate head-downwards within the cocoon. If the caterpillar is male it will morph into something that resembles a fuzzy pipe cleaner which has sprouted wings and as such, will cut his way out of the cocoon sack to search for a female. Males are about 2.5– 3.0 cm long with a wingspan of about 4–5 cm. The wings are brown with contrasting pale veins; the head and front of the thorax are covered with bright orange scales and the abdomen is dark brown banded with orange. The male has no method of feeding therefore his search for a female must be quick and passionate if it is to be successful.

Adult females develop a white and brown head, are wingless and have very tiny reduced legs and antennae. They remain within the cocoon case. Mating takes place through the hole in the ‘tail end’ of the female’s case. This presents some difficulties because the female is inverted with her abdomen furthest from the opening. The male is able to mate with the female using his elongate telescoping abdomen: hence the species name, ‘elongata’. The female lays thousands of eggs within the case. Once laid and as is common in the invertebrate world, she dies almost immediately within
the cocoon sack. Meanwhile the eggs hatch into tiny caterpillars and feed off the remains of the cocoon. Those that survive, grow, move off and re-start the Saunders Case Moth’s life cycle, building their own sack cocoons. But who transmits the knowledge that allows these juvenile caterpillars to build such intricate cocoon shelters, both parents are dead by the time they are hatchlings?

Just another one of nature’s wonderful mysteries.