Last month due to our summertime hour switch, my early morning walk started in darkness. Passing towards the Southern Boulevard, I heard a loud abrasive snarling snort. Having lived in New Zealand and nearby Melbourne’s Botanical Gardens, I immediately recognised the protective cry of the Brushtail Possum. This was the first time I had any evidence of Possums living in Sanctuary Lakes and as always happens in these cases, I only had to walk a further couple of hundred metres for a second distinctive deep guttural snarl high in the branches of a maturing eucalypt gum tree.

The Vic Park ranger told me there were couple of possums roaming around the Point Cook Homestead and Stables. The Friends of Skeleton Creek also mentioned a few possums were in the vicinity north of the Creek and around Altona Meadows. But until now and to my knowledge, there has been no tangible evidence of Possums residing within the Sanctuary Lakes Estate.

There are two species of Possum living in the Melbourne area, the Ring Tale and the Brushtail Possum. The most common in our western districts are the Brushtail. 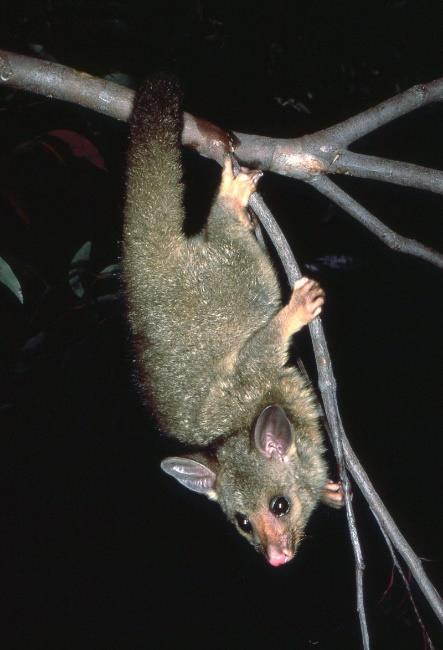 All possums are nocturnal creatures, but none more so, than the Brushtail who seems to have taken up residence here in Sanctuary Lakes. “Brushy” lives a quite secretive and solitary life. “Brushy” uses secretions from glands near their chin, chest and tail to mark their territory allowing them to keep other possums at a distance.

If you see a “Brushy” in your backyard, you can assume it is their home range. They will not allow other possums to enter. If your “Brushy” dies, or is removed, another will take its place as soon as the scent has worn off.

Originally Brushtail Possums lived in native woodlands areas, but since the rise of the human population they have adapted to living comfortably in urban areas.

To see a “Brushy” during the day is very rare although sometimes you can see one emerging from their daytime roosts in the very late afternoon. The best way to view a “Brushy” is to take a torchlight and shine the light into the foliage where you hear their call. They can be quite noisy, and a little scary if you don’t know what you’re hearing! “Brushy” communicates througha range of sounds from short, loud aggressive snarls to guttural coughs and sharp hisses.

There’s something special about spotlighting a “Brushy” weaving its way along a nearby tree branch. Staring down at youwith its bulging eyes, it’s a reminder that our estate can provide a habitat for some of our native Australian wildlife.

An adult “Brushy” is typically cat-sized with a pointed face, long oval ears, pink nose and bushy black tail. Studies of their behaviour showed that about 16 percent of their time is spent feeding, 30 percent travelling, 44 percent resting and sleeping and finally,10 percent grooming. “Brushes” are arboreal (meaning tree-living animals)therefore are well adapted for climbing with their sharp claws; a hand-like back foot for grasping and a strong flexible (prehensile) tail for curling around branches. They will move rapidly among trees and will leap skil fully from branch to branch. Rarely are they seen moving along the ground

The “Brushy’” is incredibly agile! They can climb vertical walls and have been known to jump from a tree to roof up to 4 metres away. They can pull off roof tiles and squeeze through the smallest of holes. Remarkably, they have been seen walking along power lines and balancing on fine branches.

Female “Brushy” who are called Jills have a 17-day pregnancy. This may seem very short, but they are marsupials, and their babies are born tiny and undeveloped compared to humans! A newborn brushtail possum is only 1.5cm long and weighs only 2 g. As usual for marsupials, the newborn may climb, unaided, through the female's fur and into the pouchand attach to a teat. 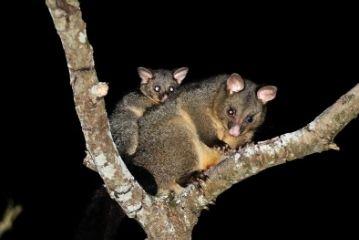 A Jill and Joey Brushy

Baby possums are called Joeys. Most Joeys are born in the autumn: March to May, but there are some bornin spring: September to November. The young remain inside the mother's pouch for another 4–5 months. After which Joeys enjoy riding on their mother’s back for a further two months.

If you thought their gestation period was short, well so is their childhood. At ten months a Brushtail Possum is an adult. Female “Brushy” can begin breeding at just twelve months! They usually give birth to just one Joey at a time. Male“Brushy” are called Jacks, develop at a much slower pace, sexually maturing at two years old. Brushtail possums can live up to twelve years in the wild

“Brushy” eats mainly plant material, preferring eucalyptus leaves with their high nutrient content. They also consume certain shrubs, wattles, herbs, flowers and fruit, supplemented with bird eggs, baby birds and some insects. “Brushy” mainly forages in a tree’s canopy, but occasionally they do raid gardens, particularly the vegie and fruit patches They have strong teeth and often use their front paws to hold their food while eating.

Can Possums become Pests. Yes, besides eating your favourite garden vegies, theycan make their densin the space between a house’s roof and ceiling. Possums can gain access to the roof space through loose tiles, loose roofing iron, broken eaves and holes in timber or brick work. Make sure these are covered up and there are no tree branches leading to your roof.

In the past, trapped possums who were causing problems in roofs were caught and then released into another area. Recent research has shown that possums can't cope in a new environment, and die within a few days of release. Also removing a possum from your property will just make room for another one to move in. The only solution to possums in your roof is to get them out and stop them getting back in.

The Possum along with the Koala and Kangaroo are Australia’s Iconic mammals. We should be delighted that they may become our neighbours. Let’s give them a warm welcome with that other Aussie Icon, Dame Edna Everage’s opening line