As Resort Maintenance Manager Greg Fryer and Lake and Irrigation Manager Anthony Withington will always tell you, the secret to keeping our Lake absolutely pristine perfect is to maintain a vigorous healthy revolving food chain within the lake. The sea grasses and other our aquatic vegetation, supports the small invertebrates, such as Shrimps, Snails which equally support the fish, who in turn along with the vegetation support the water birds. All in their own way play their part in circulating the food chain and keeping the Lake pristine.

But all this can unravel if the water balance swings away from the desired salinity levels.

And this happened dramatically, over the last twelve months with excessive fresh water flowing into our Lake. Due in part to our changing weather cycle of increased spring and summer rainfall, has meant our roadways and wetlands poured their stormwater into the Lake. This had an immediate effect of increasing Seagrass growth due to the increase in nutrients entering the lake system The 2020 calendar year saw a growth of 863 tons, a 60% increase of Seagrass on the yearly average of 535 tons. Equally dramatically within the Seagrass, the Algae bloomed to the highest amount ever recorded. Putting the Lake in danger of being covered in unsightly, smelly floating mats of Algae. Fortunately, due to constant vigilance and hard work from the Lake Maintenance crew this only occurred in very minor cases. Algae is an essential link in the Lakes food cycle, so why is it perceived as a “baddie”. The predominant Algae in Sanctuary Lakes is the Filamentous algae 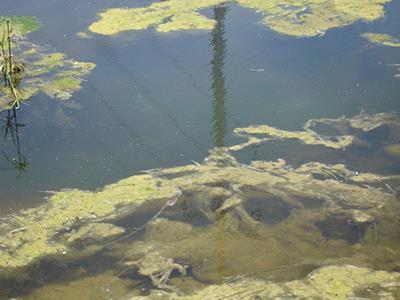 Filamentous algae floating on the surface of the Lake

Filamentous algae are colonies of microscopic plants that link together to form threads or mesh-like filaments. These primitive plants normally grow under the water on the leaves of seagrass stems or other substrates, but when over-produced they will break loose, rise to the surface and form floating mats. Filamentous algae are important because they produce oxygen and food for the plants and animals that live in the Lake, but they also can cause problems such as clogs and stagnancy. Filamentous algae do not have roots; rather they get their nutrients directly from the water meaning that their growth and reproduction are entirely dependent on the amount of nutrients in the water. Because our Lake collects stormwater flowing from the wetlands, gardens, golf course and roads within and around our Estate, the abundance of algae is a result of the many sources of nutrients from our residential and local commercial developments.

Filamentous algae do not produce toxins that are harmful to humans. The floating clumps are unsightly, but they are not in themselves a threat to your health. The problem lies when the Filamentous algae grows to the extent that there is an overabundance on the Lake’s surface. This will limit the exchange of oxygen between the water and the atmosphere, and will prevent photosynthesis from producing oxygen in the water. As a result, it is more likely to see fish dying, waterbirds fleeing and an unpleasant noxious odour due to lack of oxygen.

Fortunately, this has not happened and our Lake has never been healthier, just witness the number Water Bird species now visiting the shores. Also there has been an increase in not only species of fish, but actual numbers. The Anglers tell me that Black Bream, Red Mullet and Flatheads are plentiful and they have been joined by a smallish shoal of Australian Salmon and a large number of Short Fined Eels.

Although it is commonly referred to as a salmon in Australia and its species epithet trutta is the Latin for trout, sadly it is not related to the salmon or trout Salmonidae family. The probable reason for the name is that there is a slight similarity in shape and colour to the Atlantic Salmon. They are streamlined with long slender bodies and have a dark blush green dorsally and silvery white ventrally. The Aussie Salmon’s average size is around forty centimetres and can weigh four to five kilograms. Large shoals are found in Port Phillip Bay and are often seen locally around Altona Pier. Anglers have told me that the Aussie Salmon is a “sporting catch” and not a bad feed, so long as you cook it fresh and it’s great for the BBQ. Unlike the ‘pink’ flesh of the Atlantic Salmon the Australian Salmon has a pleasant white colouring. 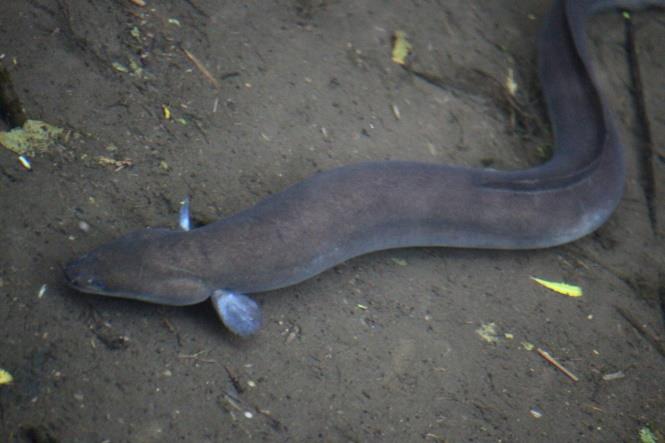 Short finned eels have an interesting life-cycle. The mature adults return to the sea in order to spawn. Where they actually spawn is uncertain, but is believed to be in the South Coral Sea off the coast of North Queensland. Mature females about a metre in length have been found to contain more than 3 million eggs. After spawning the Eel will die.

The tiny eel larvae, known as leptocephali because of their leaf like flat shape, are carried south by the East Australian Current from their northern spawning grounds until our Short-Finns reach Port Phillip Bay. At around this time they metamorphose into the normal tubular eel shape although devoid of any pigment and so are known as glass eels.

It is thought that the Sanctuary Lakes Short-Finns have come either through our Tidal Storage Pond on Skeleton Creek or the stormwater retention ponds above Point Cook Road feeding the Canal. Once in our Lake the glass eels quickly develop full pigment, growing to an average size of over a metre in length and weighing approximately one to two kilos. Eels can live for a long time and females have been known to reach the age of 30 years before feeling the urge to migrate into the ocean and begin the cycle all over again.

Anglers rarely deliberately fish for Short Finns, but they can provide good fun catching them. They can also provide good eating.

Thanks to our maintenance Team, this year has once again shown, that our Lake is a magnificent central show piece for our estate.